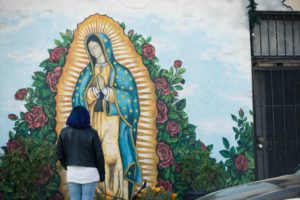 Mothers know what sacrifice means. No one else in  this world is asked to give of themselves more wholly to another person than a mother. She gives her body, time, autonomy, attention, food, energy, and life to this little baby being. And after a few short years, she is asked to let go of the person she has given her mind, body, and heart to, as  if detachment can happen at such a quick pivot, as if their bodies were never intimately entwined with each other.

The intimacy a mother and child share reminds me of our relationship with God  as a mother. The creation does not remember this intimate period, but the creator does. The creation cannot conceive of this time of intimacy, but those times remain in the creator’s memories. The sacrifice of a mother comes when her created leaves and ventures without her. The relationship also reminds me of how, out  of such sacrificial love, Jesus gave his life for us. In a similar way, mothers give their bodies completely in pregnancy. They sacrifice themselves at birth. And they sacrifice again when it’s time to let their children leave their metaphorical nests.

“mothers give their bodies completely in pregnancy. They sacrifice themselves at birth.”

When the angel Gabriel came to Mary, the angel greeted her with an affirmation and then an assurance, “Greetings you who  are highly favored! The Lord is with you.” (Luke 1:28). Mary had not yet done a thing to warrant any sort of status by society’s standards. She was simply Mary. However, simply being Mary was enough for the  angel to affirm her  position in God’s  eyes, “you who are  highly favored.”  Sometimes, as  women, it is easy to forget that we are  not only enough  but highly favored.  In our work life, we  may feel pressed to  perform, produce,  progress, or  proliferate. We may be pressured, or  even pressure ourselves, to strive toward bigger and better numbers or some other quantifiable measures of performance. While these are not bad markers in and of themselves, they are measures  of evaluation that sometimes leave us forgetting that we are more than enough, highly favored just as we are.

The second part to the angel’s greeting was an assurance, “the Lord is with you.” Before the angel told Mary what was about to happen, the angel gave an assurance. Before we step into new responsibilities, before we move into a new season of work or life, before the big promotion or new job or project loss, before anything happens, we women are already positioned as highly favored and assured that the Lord is with us.

The angel reiterates the affirmation and assurance again, “Do not be afraid, Mary; you have found favor with God.” (Luke 1:30). “Do not be afraid” is another assurance that the Lord is with Mary. There is nothing to worry about, in neither her present situation talking to this angel nor her future situation that the angel is about to unfold. The Lord is with her. The second affirmation makes both readers of the text and Mary certain that she in fact had favor with God. According to first century Jewish custom, there would be no reason for her to have any special status otherwise. She was not a queen or of political stature; she did not have wealth; and she was a young woman with little to no agency of her own. Yet, she was called highly favored twice before she was told what was about to happen.

And then the angel invites her into a new season, a new role, a new task: “You will be with child and give birth to a son, and you are to give him the name Jesus.” (Luke 1:31). By this point, she has been affirmed and assured in her chosenness with the Lord. And it is this affirmation and assurance that readies and empowers her to make the sacrifices she makes.

Saying yes to the angel Gabriel was a risky response. Her pending marriage would have been in jeopardy if Joseph decided Mary’s tale of the angel’s announcement was only a cover-up for infidelity. Her legal status would have been in jeopardy if accused of adultery. Her economic status would have also been in jeopardy, since first century Jewish women were dependent on the finances of either their parents or their husbands. I imagine that Mary’s emotional stress was incredibly high, because apart from the logistical impossibility of pregnancy without consummation, there was also the fact that infant mortality was common in that time. Not to mention that her life would have been at risk, as dying in childbirth was a real possibility. Mary’s yes to the angel was a sacrificial yes. It was a yes despite her own needs. It was a yes despite what made sense. It was a yes for the sake of others.

“she has been affirmed and assured in her chosenness with the Lord…. this affirmation and assurance readies and empowers her to make the sacrifices she makes.”

As women, we encounter elements of sacrifice when it comes to our vocational lives. A yes to work can mean a sacrifice of time with our children. A yes to staying at home with children can mean a sacrifice of vocational development. A yes to balancing both vocation and family may be a sacrifice of self-care. Work and life balance can feel like an ongoing choice for many women, but we are not left alone in these decisions. Whatever the task before us, whatever the next season God calls us to, we are affirmed in our identity in Jesus Christ and assured that the Lord is with us. God’s invitation to us is accompanied with a reminder that we too are highly favored and that, like Mary, the Lord is also with us.

Thanks to our friends at Fuller’s De Pree Center for this article, originally published in She Is…: Biblical Reflections on Vocation, which you can download for free here.

Joyce del Rosario is currently a PhD candidate at Fuller Theological Seminary’s School of Intercultural Studies. Previously, she ran youth programs in various cultural and economic communities for over 20 years. She was the executive director of New Creation Home Ministries, a residential and outreach program for teen moms. She has also served as an area director for Young Life. Joyce holds a MDiv from Princeton Theological Seminary and a ThM from Fuller Theological Seminary. She is also an active leader in the Christian Community Development Association (CCDA).