“The Didone Effect”: A Snapshot of a Mission Story in Taiwan Behind COVID-19

Camillian Father Giuseppe Didone is an Italian priest who has been in Taiwan since 1965. He started special care centers that look after the intellectually disabled people in rural Taiwan. He currently works at the Camillian Saint Mary’s Hospital Luodong in Yilan County (Northeast of Taiwan).

Burdened by the COVID-19 developments in Italy, Didone started a fundraising campaign in Taiwan on April 1, 2020, appealing for donations for the purchase of emergency medical provisions for healthcare workers in Italy. The campaign was set to close on April 15.

After a long weekend when Didone’s colleagues looked into the amount, they found on April 6 that they had received US $3.97 million in six days from over 20,000 people. A lot of donors, including many who are less well-to-do, expressed that they wanted to repay the missionaries who have dedicated their lives to Taiwan. Quite a number of participants are local people who have benefited from the services at Camillian Saint Mary’s Hospital Luodong in Yilan.

So huge is the donation amount, Didone issued a letter on April 7 to thank the Taiwanese people, and to ask people to stop making donations because it was too much. In his own words: 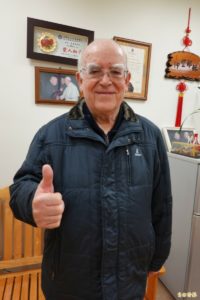 “We did not set a number when we first started the fundraising campaign, and the amount that we have received far exceeds our capacity to prepare medical supplies for the healthcare workers in Italy. So we sincerely apologize to the Taiwanese society: regarding the fundraising for Italy campaign, we thank you; and we plead you not to make any more donations. We now urgently need to focus on gathering medical supplies together….”

In other words, even though Didone and his colleagues have the needed funds, the world is in such shortage of medical supplies, they are not confident that they can purchase all the supplies that they hope to obtain on Italy’s behalf.

It is somewhat amusing that later in the letter, Didone writes, “Of the 20,000 kind donors, if anyone thinks that the amount that we have received is too big, and believes that his/her donation can be used in another place that needs more help, please feel free to ask for your donation back, or suggest us how you would like us to use your gift….”

Has anyone heard of any fundraiser welcoming people to take back their donations?

Although Didone called off the fundraising campaign on April 7, he was not able to call off Taiwanese’ keen desire to lend a hand to help Italy fight the COVID-19 pandemic. More people made their way to the fundraising center after April 7, and it was reported on April 10 that Didone received nearly US $4.99 million in donations. Didone subsequently states that he may use the funds to help other European countries if there is leftover money.

To help facilitate the fundraising campaign started by Didone, Yang Chih-liang, former Minister of the Department of Health of Taiwan, wrote an article entitled, “Having Taken One Mouthful From Others, Return At Least Half a Mouthful.” The article appeared in a Taiwanese news outlet on April 2.

Has anyone heard of any fundraiser welcoming people to take back their donations?

There’s a Taiwanese idiom that goes, “When one takes a mouthful (of cooked rice is implied) from others, one needs to return multiple times the amount (of raw rice is implied)” (食人一口，報人一斗; reads: Tsia̍h lâng tsi̍t kháu, pò lâng tsi̍t táu). The idiom encourages people not only to remember, but also to pay back the grace and favor that others have shown you, when one is able to do so. The stark contrast of the amount received and to be repaid in the idiom is conspicuous, although it should perhaps be understood as a hyperbole than a literal suggestion. 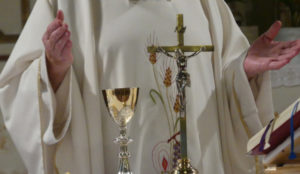 In his article, Yang Chih-liang starts by saying, “When one takes a mouthful (of rice) from others, one needs to return multiple times the amount. If one cannot return multiple times the amount, one can return a bowl (of rice). If one cannot return a bowl (of rice), one can at least return half a mouthful (of rice).” Yang then goes on to recount history, of how in the early days when Taiwan struggled with poverty and basic healthcare, dozens and dozens of Western missionaries with medical backgrounds dedicated their lives to care for Taiwanese’ well-being. And this is the time to repay. Yang further states, “Taiwan plans to send 100,000 N95 masks to Italy. The value is about NTD$110,000,00 (USD $366,670). Compared to how missionaries have cared for the people in rural Taiwan for over half a century, such is not even one thousandth the value.” While it is hard to assess how differently Didone’s fundraising campaign would have turned out without Yang’s voice, it can be observed that the way Yang framed the fundraising campaign resonated deeply with countless Taiwanese. It would also not be unfair to suggest that over a century of mission efforts in Taiwan seem to have been validated by the general public, which, in turn, propelled many Taiwanese today to return the grace and favor that they have received, and understand as unconditional.

When one takes a mouthful (of rice) from others, one needs to return multiple times the amount.

It is worth noting that among the donors that express appreciation to missionaries is the famed Lungshan Temple in Taipei, which contributed US $100,000 for the cause and is known as one of the most generous donors. As observed in the current climate, the affirmation of Taiwan’s missionary community intimated that the love that missionaries exuded through their engagement in social services, has transcended not only color but also religious lines, as it made its way to the hearts of local people who are mostly Buddhists or Taoists. 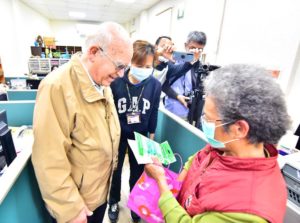 What is unique about Taiwan is that the anti-missionary sentiment that has been strong in some neighboring Asian countries has largely been absent in Taiwan. And while the term “missionary” often contains negative connotations in many countries around the world as it is tied to colonial history, the same term, more often than not, continues to evoke positive associations for Taiwanese. Possible explanations include in the most recent history, it was Japan rather than a Western country that colonized Taiwan (1895-1945), and it was the United States that provided humanitarian assistance in Taiwan for fifteen years following World War II. What’s more, Catholic and Protestant missionaries’ involvement in caring for the marginalized or underprivileged groups in Taiwan is known island-wide. Further, it was primarily the Presbyterian missionaries (mainly from England, Scotland, Canada, and the U.S.) who stood with the Taiwanese people as Taiwan endured a tumultuous time under different oppressive Asian rulers throughout much of the twentieth century.

Since the colonial legacies that Taiwan needs to free herself from are not first and foremost European or North American empires, it appears that Taiwanese are able to appreciate Western missionaries’ works without having to first tease out the often-accompanied colonial baggage. Put differently, “the Didone effect” that galvanized thousands of Taiwanese into the collective sensibility of wanting to pay back, seems to indicate that the “mission” concept, broadly speaking, is more layered than some people who resist the idea have claimed.

Judith Lin received her PhD in church history from Fuller Theological Seminary in 2019. Her doctoral dissertation has been turned into a book, The Charismatic Movement in Taiwan from 1945 to 1995: Clashes, Concord, and Cacophony (Palgrave Macmillan, forthcoming).