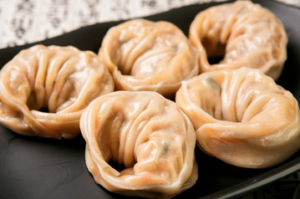 The holidays are typically my favorite time of the year – a break from work for me and my husband, a break from school for my kids, intentional time with family and friends, a chance to sit in reflection and gratitude for the year. This year, though, I carried an unexpected sense of heaviness with me and, oddly enough, it all started with dumplings.

I was adopted by a white American family and came to the US from South Korea three months after I was born. I grew up with white parents in a black community; the only other Asian Americans I knew were my sisters and one school friend, all of whom were also adopted. None of us had the language or understanding to articulate the difficulties we were facing growing up as minorities everywhere – at school, at church, in our own family. We ignored our Asian-ness as much as possible, as did everyone around us.

We were all colorblind and I learned to take the sting of microaggressions in stride, to bury it under my positivity and optimistic disposition. My family history became stories of soldiers in the Civil War and farmers during the Great Depression, and my family tree for school projects were full of white Americans. My comfort foods were made with cheese and typically baked into a buttery casserole. My ethnic heritage subsisted on the bottom row of our family bookshelf where we kept a History of Korea anthology, and in a hanbok I put on for professional pictures every couple of years. It has taken me almost 35 years to fully accept myself as an Asian American and a person of color.

As I am blessed to be in community with more AAPIs as an adult, I have learned more about their experiences, their histories, and their traditions. I scrolled through my social media feed over the holidays and ran into several posts in which friends were home with their families, making dumplings, as was their tradition over the holidays, and realized I had never made a dumpling or any other Korean food. Ever. And instead of sitting in the joy that usually comes with the holidays, I was crying over dumplings, grieving and lamenting a loss I had never articulated.

…I was crying over dumplings,
grieving and lamenting a loss I had never articulated.

Friends have told me of their struggle, even as adults, to accept the Asian part of their Asian American identity – the struggle of the in-between-ness, the liminality of standing firmly in two cultures at once. I acknowledge their journeys and pain, and yet I bear my own, different struggle: my Asian heritage was never offered to me. I was denied agency in my own life as a child, and that led to the loss of my heritage and the loss of a crucial piece of my identity. I grieve those losses and I lament the systemic issues within adoption and their role in my lack of choice and agency. This is the space I occupied over the holidays and continue to wrestle with.

How do I reconcile the grief and anger I am experiencing around my adopted identity and my identity as God’s adopted child? How do I thrive within that narrative instead of running from it? How do I celebrate the gifts and joys my life as a Korean-American adoptee has given me while simultaneously recognizing the need to grieve for what I have lost, both knowingly and unknowingly? Occupying both of those spaces does not seem possible; being “both” of something seems unnavigable.

Isn’t duality the difficult gift we are offered to bear and steward?

But perhaps this is actually the most Asian American thing about me – to hold two distinct things in tandem, to fully inhabit two different, sometimes seemingly opposite spaces as a person with a reconciled identity. Isn’t this the quintessential Asian American experience? Isn’t duality the difficult gift we are offered to bear and steward?

For me right now, this looks like singing American Christmas hymns with gratitude and joy even while I am lamenting the loss of Korean traditions. It is the joy of watching my mom and dad grandparent my kids and the sadness of knowing there are grandparents my kids will likely never know. It is grieving the hard parts of my past and holding bright hope for the future of my Asian American daughters. It is teaching them how to use chopsticks, asking questions, being honest, going to therapy. It is questioning God about my lack of agency and trusting that my frame was not hidden from God in my mother’s womb. It is recognizing liminality as a burden to bear and a gift to be stewarded. And it’s learning to make dumplings.

Andrea serves as a pastoral associate at Christ City Church in Washington, DC. She grew up in the DC suburbs as a Korean American adoptee and pastor’s kid who loved being at church every day of the week. She’s currently pursuing an MDiv at Fuller Seminary. Andrea lives in the H Street neighborhood of DC with her husband, Drew, and two elementary-aged daughters, Jolie and Rowen.